Again, I am low on time, so I will copy and paste from my president’s letter:

“To report on this past week. We planned on baptizing and confirming four last weekend. Only the clerk’s daughter was baptized and she was an hour late to church, so she missed her confirmation.

“A Seniagya family, the Amoako’s, were previously involved in Polygamy. With the problem mostly being that people are too poor to pay the bride price, and are therefore not even legally married to the person who they are living with. The man apparently owns many lands and is fairly wealthy, though his living conditions would suggest otherwise. None the less, he had more than one wife at one time, though he is now only married to one, he still needs the special interview. We would like that as soon as possible.

“Still, things are really getting good in the area. We had five investigators at sacrament meeting, and that’s not counting the one that came late and those that went to Seniagya. I’m so, so, so grateful to be here. I’m loving Effiduase. When I first got here, the first thing that I heard was that the area was hard. I just see that it’s been a long time since they’ve had a consecrated companionship and now that we’re here we’re just getting miracles all over.”

Yeah, the Amoako family from Seniagya; the man at one point had three wives. We only figured this out as we were filling out the baptismal records and realized that he doesn’t have hardly any children with his current wife, but they both have several children. Crazy right? Polygamy is so real and it is delaying their baptism.

This is where we came to give the sacrament to Seniagya last week. They meet in a school owned by a member. About five people came. 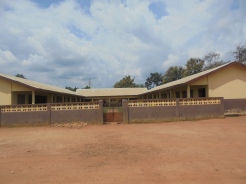 My “son,” Elder Gadah, is helping me with the Twi a TON! I can carry on a 5 minute conversation and can even pray in Twi now. It’s cool and somewhat surprising how many church materials are translated into Twi. I love it! When I come home and pound fufu for you, I hope you won’t mind when I pray over the food in Twi.

Twi is VERY interesting. It’s funny how English and Twi have kinda “dripped” into each other in this culture. You will get people who are very educated, but they still speak Twi because this is their culture, however the way that they structure their sentences is a bit like English. And with the Twi- vice versa. The educated here speak English well. For example Brother Emmanuel, the bible scholar, speaks perfect English. But the less educated will use words in their English that are Twi and use English words in their Twi sentences.

Like take for instance: three people are in a conversation. Person A gets up and leaves while Person B and C are talking. B asks C, “Na O ko hin?” (And where is he going?); C responds “Men ye sure.”  (I’m not sure). The English words are there, so listening to them speak is fairly easy to tell where the sentence is going

Personally, I tend to think in Ghanaian-English. Sometimes I even think in Twi. My only problem is that people speak VERY fast. I think my biggest strength is that when I speak, it’s very clear for them to hear. My pronunciation is always good.

Since Twi is a tonal language, you can say the same word two different ways and you’ll get two or even three different words from it. The book you sent, Mom, helps in some vocabulary as well as grammar and stuff, but the book doesn’t really talk about missionary vocabulary, so I had to learn that one myself.

Are you safe where you are in your little town of Effiduase? Yes, I’m very safe. I’m making friends with all my Muslim neighbors. It’s fun! There were more dangerous groups running around in Obuasi because they had illegal mining going on, so it was a bit sketchy in certain parts, but here everything is well! I’m happy and the only thing I’m really worried about is having too much stuff to pack into my suitcases for when I travel home. xD

Pounding fufu: Yeah, you make fufu with cassava and plantain normally. You pound it for a very long time until it makes a sort of dough. If cassava isn’t around, I’ll make it with potatoes.

A lot of people are very surprised when I tell them that I’m taking a mortar home with me. The mortar is made with a really nice wood, so it will stay good for a long time. I spent a bit of time sanding it down and it still has more to go.

We invited other elders to come and enjoy the food with us and we even gave some to our branch’s first councilor to the president. (He couldn’t even finish it!) The fufu was seriously plenty. I could barely walk after! Here are a couple of photos. 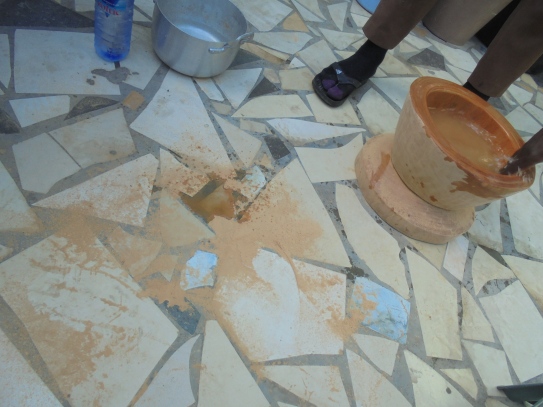 If you want I can teach you how to drive fufu while I pound, Mom! Just know that you have to move your hand fast! I don’t want to smash it.  It will be fun. I’ll even get Dad and Saylor and Paul to help pound and everything. I just need to find cassava…

I plan on giving a lot of my things away to people who could use them. I’ll only be coming with souvenirs and the clothes on my back.

District Activity: We had a district activity where we played soccer, and we wanted to email before we head back to our area and proselyte small and pound fufu for dinner!

Finish obedient to the end! For this mission and the next one that lasts the rest of my life! I’m excited to come back home and just be a super awesome branch missionary and help the branch grow a ton.

What a time to be a missionary, am I right?

I’m gonna miss Ghana so much when I get back!