Editor’s note: Sorry for the delays in posts. We have had sickness, holiday visitors, a few weeks of very short emails, and a new living arrangement. I will catch you up in the next couple of posts. SG

The Work is Progressing

This week we had a broadcast from Utah to the Africa West Area. It was very powerful, The people in the broadcast were: Elder Gary Stevenson of the Quorum of the Twelve Apostles (he presided), Elder L. Whitney Clayton of the Presidency of the Seventy, Elder Edward Dube (from Zimbabwe) of the Seventy, and Sister Carol Stephens, First counselor in the General Relief Society Presidency.  They all talked on a variety of topics, relating things about living the gospel and the atonement, but I feel that the main purpose of the broadcast was in Elder Dube’s remarks regarding a tradition that is not only in West Africa but all over Africa, which is the “Bride Price” or the tradition that you have to pay a very high amount for a bride in order to get married.  Sometimes that take years to accumulate. It was a very powerful conference broadcast. One thing that I gained from it is that I’m now trying to smile all the time.

Later on, I was teaching this older woman who has gone less active in the Church. I got into that lesson and she was seriously doubting the Book of Mormon. The points I was making and the things I was saying were not mine own. I was learning as I was speaking. I felt the Spirit so strong.  I love this work.

Other than that, our week was very productive even though we didn’t have any investigators at church on Sunday and we went to Kumasi for more meetings on Wednesday and Thursday. But we still taught 20 lessons across 30 hours of proselyting. I’d count that as a win for not being able to work those two days that are usually filled with nine hours proselyting each. Yay, missionary work!

I’ve been seriously seriously bold recently. I keep in mind to not be overbearing, but I’m definitely more bold. Yeah, missionary work! I’ve been learning how to conquer fear. Not that my fears have vanished, but I’m overcoming them. Remember that goat from a few weeks back? I was scared to death to use that kitchen knife on him! But I got over it and did it. When I think about it – it’s still crazy…

Honestly, I have never been so happy, so consistently in my life before. It’s a huge blessing. I can’t even really remember the bad parts back when I was struggling with training a new missionary; I just look forward with eyes filled with faith. This truly is a joyful work. You know what tender mercy I’ve seen on my mission? I feel the Spirit so strongly, even when washing my clothes. Sounds weird, right? But it’s so cool! It’s like God is approving of the cleanliness of my missionary attire. I often think of Gospel subjects and just ponder as I vigorously rub and scrub the cloth together. As I do this, I’m just filled with the Spirit. I don’t know why, but I love it. God blesses us in little ways all the time. I appreciate it greatly.

When asked if he missed Thanksgiving and told about the super moon event, Emma’s progress in school, and the presidential election. These are his responses:  I wish I had thanksgiving… that’s like my 3rd favorite holiday just gone. Man, oh well. I miss fall, too. And the weather changing with the seasons. Plus, a super moon? Astronomical stuff?! I want that! I wonder if it will be in Ghana as well, we will see! I’ll be looking out tonight. Sometimes I just like to look at the moon and the stars. I really love it. I’ve always liked star gazing, but theres not always time. Tonight though, I will take time at about 9:30 my time to just look at the moon for 5-10 minutes. I’ll take a break from making my stew for the week to eat with rice and just go outside. It will be nice! 🙂

I’m super duper happy for Emma’s success in learning.  I knew that other people advancing in age and maturity would probably be the weirdest thing to me, turns out it’s true. I don’t even know what is going to happen when I get back, but I can’t wait to see all the little ones, especially Andrew and Aiden. They will all receive my love in abundance from random visits my first couple weeks back, trips to the park, and video games. All will take part, for all are invited. 😀 I’ve honestly missed being called “Uncle Ben” for a long time now. That responsibility isn’t there and neither is the joy from it. I’m coming soon my nieces and nephews! Don’t you worry!

Oh wow, the elections! Yeah, even my Mission President’s wife showed me a small clip of Trump’s speech. It was only long enough to see him and the fact that he’s been elected. I hope this means that we won’t have any more Clintons back up for election. Seriously, that woman scares me ka kra. But that’s as much time for politics that I have. I received my absentee ballot on Nov. 9th (too late to send in), filled it out, and am keeping it, because I want to be a good citizen as much as possible! Yeah, even on Nov. 8th there were plenty of people who were asking me who I was voting for because they see me as an American; I just kept my mouth shut and waited for it to be all over.

In comparison, Ghana seems normal. The elections for Ghana will be December 7th though, so I’m not sure how it will be then… politics is a hot button here as well. I see the advertisements everywhere. I won’t talk too much on the subject though, for obvious reasons until I get back.

Thanks for the Birthday Letters and Wishes

Life in Ghana is just going, we’re doing well and in general, life is so sweet. I finally received all my birthday letters and my wall is now decorated with pictures and papers, letters and drawings. I love it! I love to feel the love and see the love that home has sent to me.

Some delicious food we made. I love this stuff! 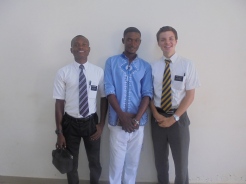 The missionaries in my ward. 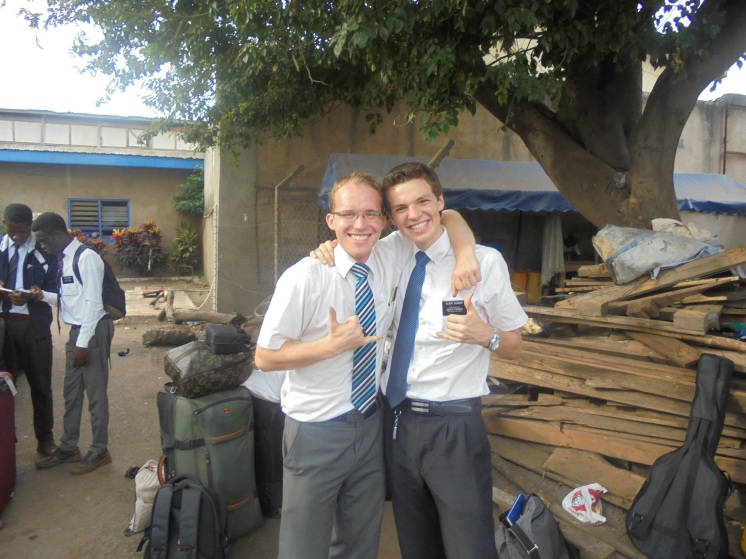 I met up with my MTC companion!

Again, just as we say in times past, time is going fast and slow at the same time.

I love this work and I love my friends and family so much.