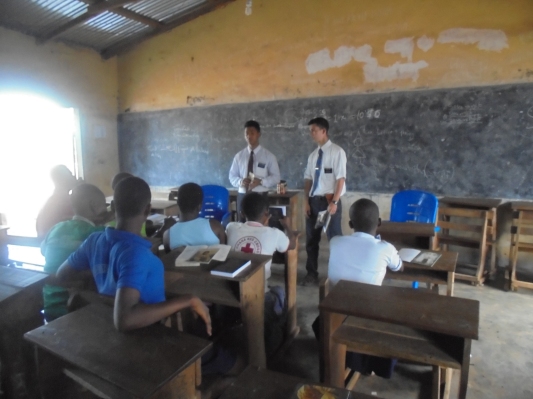 We had an activity where 3 companionships and a senior couple came and taught a whole bunch of Christians at a Muslim school. We gave out 80 copies of the Book of Mormon. It was awesome!

A Peek at the Week:

Well, from the last email you know that I got sick. I’ll give the full update.

Monday was SUPER busy. Plus I was trying to dig myself out of the hole that I had dug from the day before. We were planning on cooking, but due to the many small things that popped up, such as our Internet cafe not working, circumstances didn’t allow us to cook. We still have a bunch of ingredients just sitting in the fridge.

These two were basically the same. We woke up around 4 am, got to the bus station, and sent people to their new locations. Transfers were crazy busy and being a zone leader taking care of others isn’t always a fun job. But it’s still serving people! We then proceeded to proselyte the full day without breaks or naps, which was rough on us but we tried to just pray for strength and move on.

We had an interesting day, and this is where the sickness began. We got a meal appointment and it might’ve been bad food or something because that night my companion threw up. The next morning we proselyted for 2 hours before I felt my body start to break down. We spent the rest of the day inside and everything got worse for me. It was the same as the last two times I’ve been sick:  headache, slight fever, body aches everywhere, a little deliriousness. Yeah, it seemed like slight malaria.

I promised myself that I wouldn’t skip church, so I got on Ibuprofen and we braved it. But after church we came right back to the apartment and crashed the remainder of the day. It wasn’t fun and it almost felt like it was work induced or exhaustion induced however you want to say it. I’ve seen better days.

We are better than last night, but I’m afraid that as soon as I get back to the apartment, my world will come crashing down again. That’s how it’s been going for both, me and my companion. Both of us are sick.

Hopefully next week will be better…